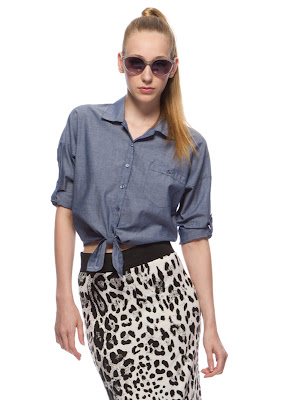 Don't be afraid to experiment with different pieces you may see on a runway, or advertising campaign, out the of ordinary outfits usually catch a fellow fashionistas eye first. A hat worn with a dress you wouldn't generally wear a hat with? White socks with faded combat boots? Embrace the pieces you have in your wardrobe. Make it look like you are setting the trends, not simply trying to follow them.

For instance (here's my big secret), I had seen men's shirts being used in photo shoots and on catwalks, about six months ago, preparing us for this autumn coming up. Immediately I went on a search for shirts and have fallen in love with them. I have several men's shirts and several women's shirts that resemble mens (though more fitted to my figure). What did I do? Wore one out to a night club one night in November. It was strange, odd, a rarity. I had a momentous amount of questions about it, and compliments over it. Last weekend I spotted a total of six girls wearing similar shirts with shorts (as I had done) over one night in Fortitude Valley. For a second I felt like I had started a trend, but the truth is, the trend is evolving from what I had seen six months ago.

Be a fashion superstar, get onto a trend, a piece, a shoe, as soon as you can. This way fashion won't seem so mundane, because by the time all your friends are wearing it, you've probably worn it a dozen times. Then you are no longer a sheep, or someone who just throws on a plain dress with sandals, you are a fashionista. Just as men's shirts pop up everywhere, I am about to prepare my new wardrobe for this coming season. Who knows what will be the next trend? The fashionista does!