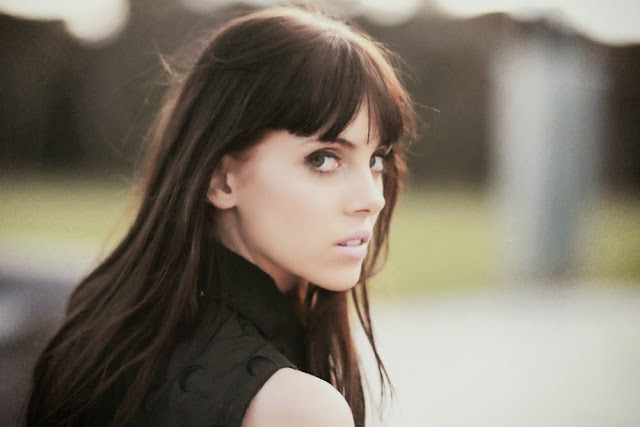 Tall, slender and beautiful with straight brown hair and bangs, this bubbly, talkative sixteen year old sits across from me at The Tea Centre on Albert Lane. She orders an English Breakfast with sides of soy milk and honey, and gets to chatting about all the usual things that encompass a sixteen year olds life. She's recently gotten her learners, procrastinates with instagram and has an increasing study load. Matilda Dods however, is not your typical sixteen year old, as she graces the pages of editorials in magazines such as Vogue and Elle. Not only is Matilda preparing to take on year twelve next year, but she is also setting her sights on the runways of Milan, Paris and Sydney.

Two years ago no one would have thought that Matilda Dods, from Byron Bay, with the bowl cut, boyish figure and sky high legs, would land a Vogue Italia editorial or Marcs campaign. Now she's taken Australia by storm in less than eighteen months and it's not stopping any time soon. "I'd never met with anyone, I'd never done anything before. From then on I've been in Sydney every second weekend."

After doing a test shoot for Alita Buffalos facebook page in 2013, it wasn't long before Busy Models, IMG Model Management and the rest of the industry was calling. They were all scrambling to get this girl, with the long face and the cheek-bones-to-die-for, on their books. Then Vogue called and as Matilda would say, the rest is all a bit surreal.
"Literally the first job I ever did was a Vogue editorial."

Matilda is an instagram enthusiast, with a love of classic Disney films (notably Peter Pan & Cinderella) and a thirst for fashion. She's also scared of the dark, something that most adults would never admit.

Day to day Matilda doesn't wear any makeup, because she has skin allergies that make her flair up when she wears it for too long. This means that Matilda practices the tradition of taking all her makeup off on set of a shoot as soon as the camera stops. If you caught her out at a cafe thirty minutes post shoot you would have no idea that she's even been on set. Matilda like myself, loves winter and wishes that we could have that winter weather all the time. 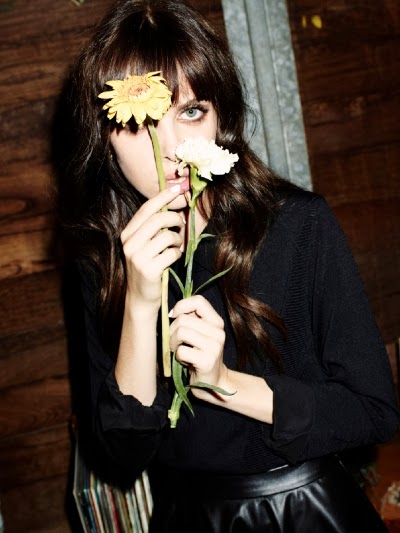 Regarding her Vogue Italia feature she reflects that she didn't even know it would be in the magazine, or any magazine for that matter. It was a submission and no one told her that it actually got published until she saw it on instagram, when she had just gotten off a plane home from Sydney. "I didn't know that it was happening (Vogue Italia feature). We didn't shoot it for Vogue Italia. It was a submission. I checked my instagram because I was bored, having just not been able to check my phone for two hours, and I screamed."

Away from the spotlight Matilda is just a sixteen year old girl focused on her studies. She doesn't see herself going to university fresh out of school however, instead she plans on taking some years off from study after she graduates school, and focus on working, so that when she gets back to study she can commit to it completely. No part-time study/part-time job for Matilda. She wants to give it her all so that she can get the most value out of it as possible. Her favourite subjects at school are English and The Humanities. For someone so young, she is mature well above her years and recognises that although she is in the limelight now, one day she won't be and there's no telling when. 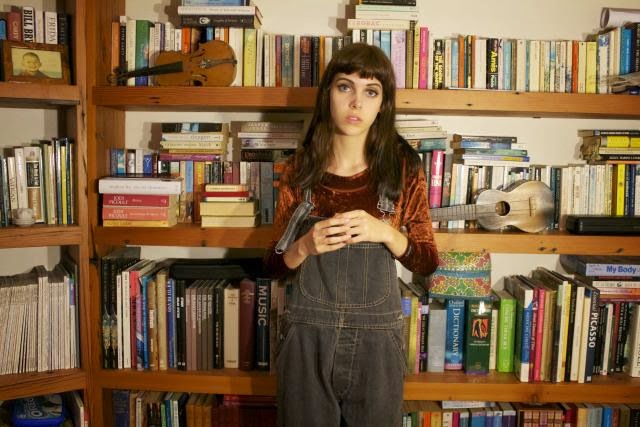 "I really love when I meet girls who are really young but are still really grounded and have their head screwed on. I struggle a bit when I meet girls that dropped out of school at age fifteen, to be a model, to go into a profession that has a foreseeable expiry date. Let's be honest, unless you're the next Kate Moss, you probably won't work past twenty six if you're lucky."

Matilda stopped mid conversation to take a photo for a couple who were sitting in a booth next to us. As she returned to the table, she sighed and made a remark about how she can't wait to get her parents trips away, like the couple in the booth next to us. Matilda has a very close connection with her family, including her parents and two siblings. "I'm so lucky that I have such a supportive family. I'm the middle child, never as good as the first child, never as loved as the last, but we all have so much love it doesn't matter. I think the relationship with your family will help teach you about every other relationship you're going to have, from romantic relationships, to friendships to work related." 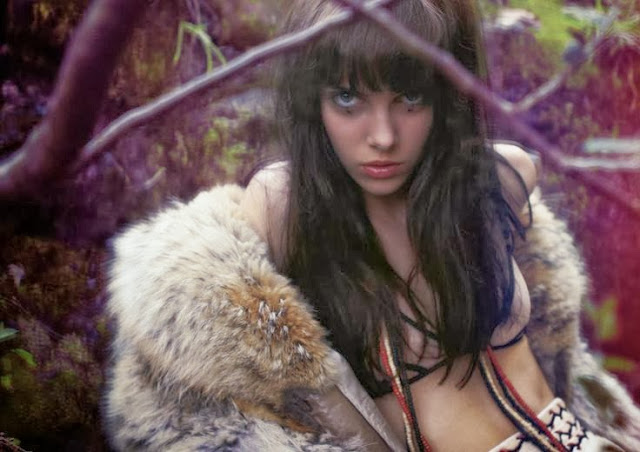 The move to modelling has definitely shaped Matildas relationship with other teenagers. When asked about how her school friends have reacted to the speedy rise to where she is at now, "I've learnt alot about my friends and about friendships over the last kind of six or seven months, realising that people get mean about things that you're proud of. I know they're supportive but some people are just blatantly mean." Any bullying she gets now is not new, it's only different to the bullying she experienced pre-contract. Before she began modelling the bullying took shape in a different sense "Boys used to throw stones at me and call me ugly." No matter what insults Matilda receives though, online or in person, she remains of the mindset that there will always be people who like you, and that she wouldn't be where she was today if everyone hated her. "I like to believe that for every hater, there's five people that like you."

"I do silly faces, test shooting, shooting for Vogue. Photographers love me and they hate me. It doesn't take alot of time to get the shot, but there is a lot of me dancing." 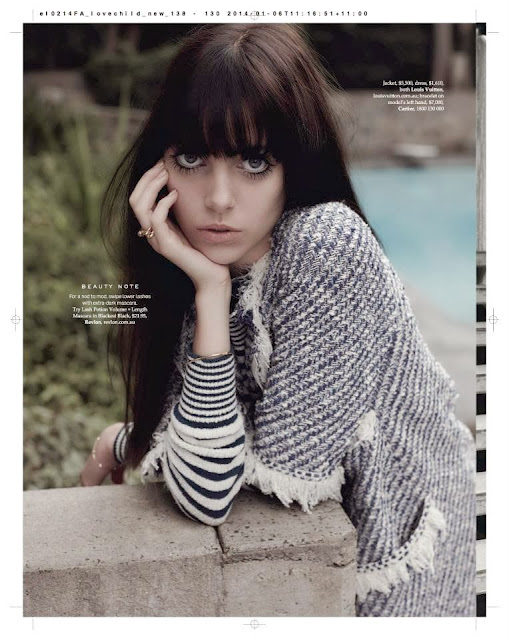 When on set of a shoot with Matilda, you'd probably find her pulling a nut mix out of her backpack between sets, as she often finds they can't cater for her dietary requirements. Matilda is both Vegan and Lactose-intolerant.

Similar to the other Vegans I have met and known, being Vegan is a way of life and definitely shapes Matilda way of living, including her wardrobe which Matilda tries to keep as Vegan as possible, "I'm really excited for the Gucci line that's just come out, but I'm looking forward to the knock offs of those snake skin boots come out, in vegan. I don't really want a python wrapped around my ankle." Matilda confessed that as much as she tries not to impose the Vegan way of thinking on to other people, she has a desire to write to one of her favourite bloggers Rumi Neely of Fashion Toast, "she wears alot of fur and I kind of want to write to her like 'Think of the Bunnies'"

Before we parted ways, I had to pull an Oprah and ask her about her exercise regime, and wasn't surprised that although this girl has a mighty fast metabolism and eats a vegan diet, also enjoys keeping fit. "I really like running and yoga. I hate lifting weights. I was going to a boxing class last year until I hurt my wrist, and my dad was like 'Skinny girls can't box'" 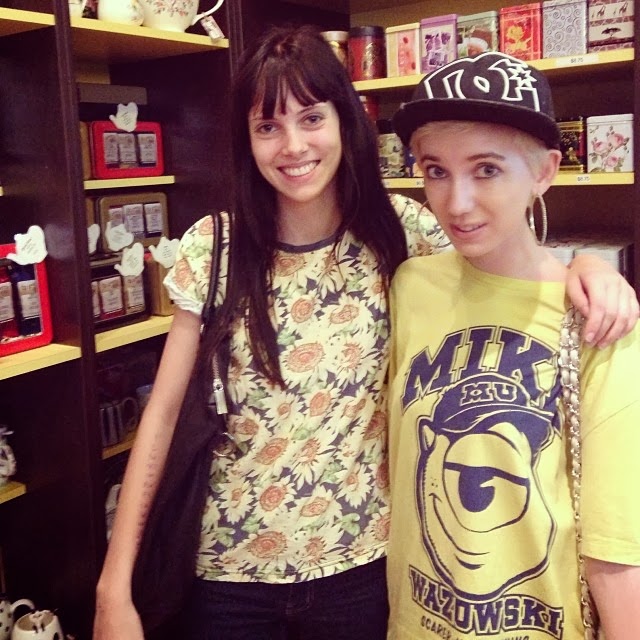