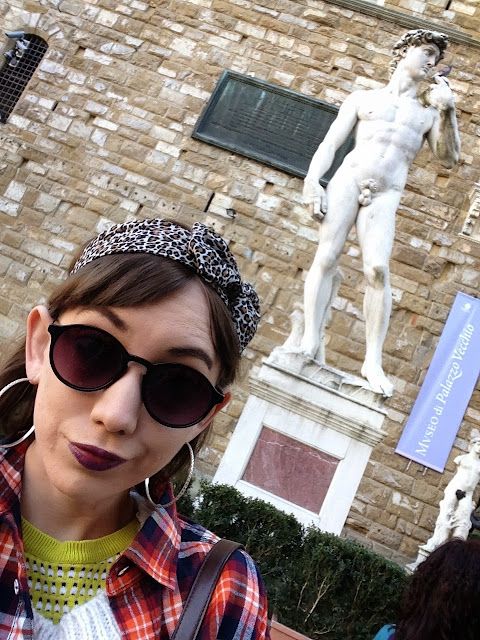 (I did not succumb to a selfie-stick, but I did take lots of selfies)

Since I started telling people that I was going/have been on a Europe trip the most consistent response I have received is "Wow, you're brave." It's not because Europe is full of pick pockets or men with too much testosterone. It's not because 2014 has several airline disasters make headlines. No, it's simply because I was "doing it alone" as it were. No photographer, no baggage handler, no sugar daddy and certainly no dependents either. It was just me and my suitcase and a bucket full of things I wanted to see, experience and achieve over the course of three weeks.

I don't think it was brave.

On reflection, I recall that at times during the trip I thought it was stupid. At times I wanted to go home. But never once did I feel like travelling solo was "brave". Did I miss human connection? Yes, of course I missed it. I missed laughing over brunch with friends. I missed taking silly selfies. I missed sharing inappropriate jokes. But most of all... I just missed Jarrod. That was it.

I don't know what it would have been like had I not have met Jarrod prior to my trip. Had we have not gotten engaged the month before. Would I have felt differently? Would I still have missed my fellow humans? This is when it must be noted that, yes of course, I did organise a trip without my significant other, but I organised this trip prior to us having even met yet and with Jarrods job it was impossible for him to get the time off to come over with me. Though I know if I had of asked him to he probably would have dropped everything and done so anyway, because he is just that incredibly good to me. I also know that deep down I needed to do this trip solo, so that I could meditate, reflect and prepare myself for the biggest adventure of all --- a life where I will never be solo again. Something that I am now more excited about than ever, because of how much it absolutely sucked not sharing a chapter of my journey with someone who deserves to be part of every chapter.

People don't notice you or think you're always waiting for someone to join you so you often end up waiting a while for service. This happened in every city I visited. It happens in Melbourne too but it's easier to get your way when you're a local. Tourist? Not so easy, especially when trying to communicate in an amateurs attempt of broken German or Italian. You may think you're saying "just me" but could actually be saying "wait for me". I was corrected for doing just that in a cafe in Berlin when the waiter and I began to butt heads. His English was poor and my German obviously needed lots of work.

Was it weird eating alone? Not really. When I first moved to Melbourne I would quite often take myself out for brunch and read the newspaper or eavesdrop on tables nearby just so I could try out a new place. I don't get embarrassed by asking for a table for one, just as I've often gone to the cinema by myself and to be honest, I'd rather go to the cinema alone so I can focus on the film rather than have to split my focus between that and the company I keep.

I will say this though. It is hard for someone very funny, like myself obviously, to spend so much time exploring solo because you don't have anyone to share the one liners or observations with, or when you try to tell someone about it back home it doesn't quite follow through because it's a "you had to be there" sort of thing. My instagram followers got a little more "humorous" posts than usual because hey, I can't hold all this genius in... I'll explode!

When there was downtime, primarily (for this trip at least) during harsh snow storms, I just slept. I recuperated. I didn't realise how tired I was from having worked without a break for a year until I... stopped and just let myself rejuvenate. One day in Tromso I think I got a decent twelve hours worth of sleep. I was struggling with a head cold and there was a freezing blizzard outside so I just relaxed and snoozed on and off. If I was with others I would have been occupied with conversation, as I'm a self-confessed chatter box, and not have fit in more than seven or eight hours.

I met more people than I ever would had I of been with friends or family. There were so many interesting people on day tours, temporary neighbours, fellow Australians in cafes or bars. I mixed and mingled with Americans, Germans, Italians, Norwegians, Brits, Canadians and South Africans alike. I have both new friends to visit on other sides of the globe and acquaintances who gave me a bit of a laugh for a couple of hours before we parted ways without any interest in staying in touch.

With the difficulties, there did come great strength and I was constantly surprising myself. I can do so many more things than I ever thought possible and I can push myself to be stronger than I have assumed I was. This comes from the prize examples of lifting suitcases onto trains, meeting with agents for apartment stays, as well as those next tier exploration of capability: a fear of heights and a fear of boats. Thanks to a little "me time" I was able to push these boundaries, and omit the fear. Being surrounded by people who don't acknowledge your fear because they aren't aware of it works wonders, especially when out on a boat in the middle of the arctic chasing a bunch of pretty lights or whilst in a somewhat un-sturdy cable car during a blizzard up a mountain covered in deep snow.

Will I do it again?

So where will my wandering heels take us next? I suppose you'll have to stay tuned, but I can assure you, it's going to be spectacular.